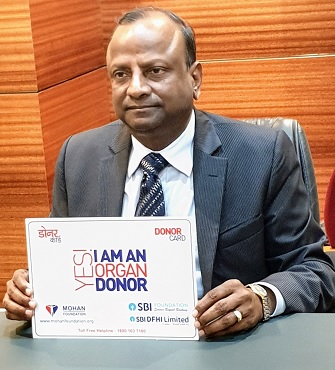 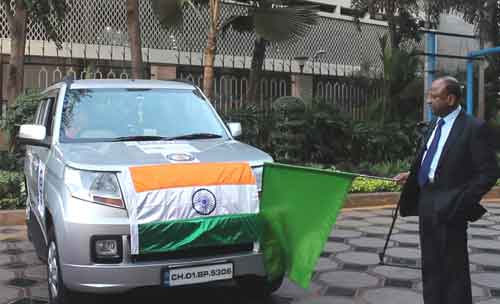 This couple’s road trip from Mumbai to London, across 14 countries, covering 22000 Kms in 60 days has a very special meaning. Their daughter was detected with end-stage kidney failure a few years back and in 2017, her life was saved after she received a kidney transplant. She lives in U.K.

After his retirement, Mr. Bhal Shekhar Chilana, who continues to work as a financial consultant in Navi Mumbai, is now on a mission to spread awareness and sensitize people and plans to take it to every nook and corner of the world by way of this ‘Road trip for Organ Donation’. He is a Life Member with MOHAN (Multi Organ Harvesting Aid Network) Foundation.

MOHAN Foundation organised the Flag-Off ceremony, on 23rd April 2018 at 6 pm , at the State Bank of India Building (Nariman Point), inviting the nation’s largest bank, State Bank of India’s senior management to do the honours. Shri Rajnish Kumar, SBI’s Chairman, who strongly believes in inspiring by example, said “Everyone must support this cause. I have registered myself as an organ donor. Many of my colleagues have also taken the pledge. On this occasion, I urge all my employees to spread awareness about the cause of Organ Donation”.

Mrs. Jaya Jairam, MOHAN Foundation Mumbai added, “We are so proud of this initiative by Mr. Chilana. We are coordinating with Organ Donation and Transplant teams from the other countries through which Mr. Chilana will be driving through, so that they can welcome his team and share the inspirational story in their country”. 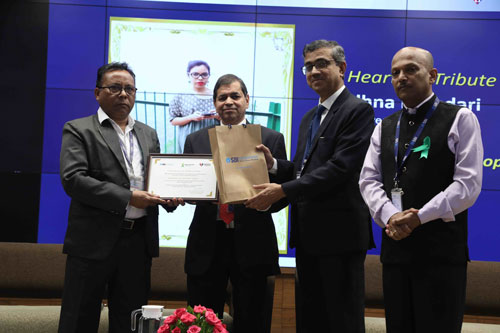 Then she invited Mr. Amit Shidgane who not only consented to donate organs and tissues of his brain dead mother, but also convinced other family members to support his decision to donate his mother Mrs. Snehlata Shidgane’s organs. Patient’s husband Mr. Shidgane, who was admitted in the same hospital at that time for a procedure also gave consent brave heartedly, and more than 12 lives were saved. 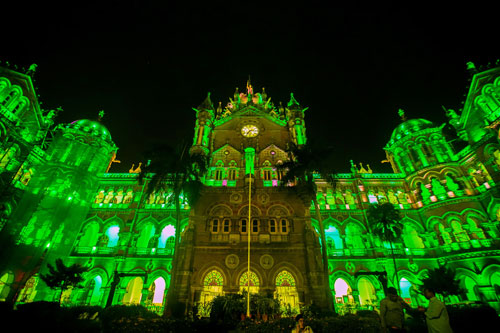 MOHAN (Multi Organ Harvesting Aid Network) Foundation and SBI Foundation who have partnered with each other through the ‘Gift Hope, Gift Life’ project, undertook this initiative. On this same day a few hospitals in Mangaluru, Karnataka also turned green to create awareness about organ donation among the public. The Indian Medical Association (IMA) also organized a walkathon on Sunday in a Manguluru stadium to mark the organ donation day. Earlier this year in February, MOHAN Foundation was also instrumental in lighting up the Qutub Minar monument green.

The organ donation cause is conventionally represented by a green ribbon. Green symbolises hope for the millions who are awaiting a second chance at life through organ transplantation. It also reminds of those who have died waiting for a life-saving organ. Most importantly, it conveys our gratitude to organ donors and their families for giving the supreme gift of all – the gift of life.

An information booth was setup by MOHAN Foundation for two days inside the busy Mumbai railway station, which is also a UNESCO World heritage site that receives an average footfall of around 6.3 lakh passengers per day. Information brochures containing facts about organ donation were handed out to the commuters and donor cards were given to those who registered as organ donors. MOHAN Foundation has taken initiatives to organize many such campaigns and train a number of volunteers to spread the message of organ donation far and wide. 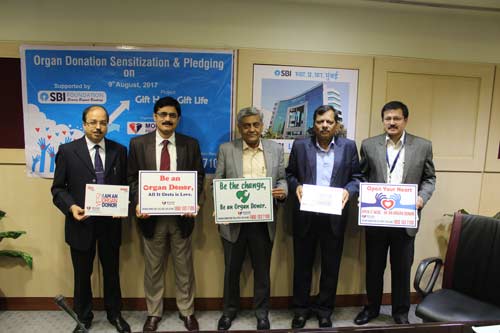 On 9th August, 2017, MOHAN Foundation conducted the awareness talks for sensitizing SBI’s employees at its LHO at Bandra Kurla Complex. The session was relayed live through video conference, to their zonal offices at Aurangabad, Pune, Worli and Goa for sensitizing their employees as well. This session was part of the Gift Hope, Gift Life project supported by SBI Foundation. Awareness Standees, banners and posters were all displayed at every floor of all these offices, at strategic locations.

Mrs. Jaya Jairam thanked the dignitaries present for taking their valuable time out for attending the sensitization session. She also thanked the Chairman and the MD at SBI Foundation for their support to the cause of organ donation. She then began her presentation by giving an introduction about MOHAN Foundation.

She then shared her own emotional journey of being a transplant recipient and how it saved her life. Some questions were asked about the waiting list and process of registration on it, who needs to be contacted for donating tissues such as eyes and skin if someone passes away at home, etc. All of these were satisfactorily answered. She finally appealed to all to support the cause by taking the Pledge to donate their organs. Mrs.Alka Maheshwari, the Chief Manager was the first person to volunteer to take the Pledge. All the senior dignitaries present took the pledge, thereby inspiring their colleagues and providing boost to the cause. Many employees signed up for the Donor Card in great numbers, which was very encouraging for the cause.

MOHAN Foundation specially wishes to thank the CGMs, GMs and DGMs of the LHO for attending the session and wholeheartedly supporting the cause. We are grateful to Mr.Mahendra Kumar Rekhi, Managing Director of SBI Foundation, Mr.Aman Bhaiya, Asst. Vice president at SBI Foundation and Mr. Mukesh Srivastava, CFO at SBI Foundation for their support. Our sincere thanks to Mrs.Alka Maheshwari, the Chief Manager (HR) and her team for their help in organising the event.